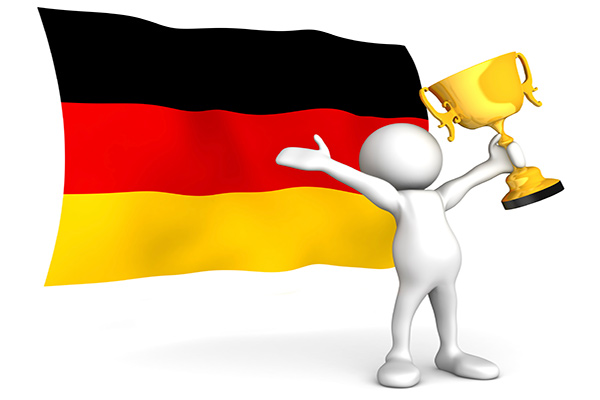 The University system does not play as significant a role in elite sport as previously. During the 1970s the focus shifted from competitive sport towards recreational and mass-participation sport. 1.6million students and 400 000 staff are members of the German University Sport Federation (adh) and 12000 students compete at the annual German University Games.

However unlike other European countries high performance sport does not play an adequate role at German universities at present. Student high performance athletes encounter severe difficulties trying to combine a regular student career with the necessities of practicing and competing at the highest level of international competitive sports. This is undoubtedly a factor in the high drop-out rate in German high performance sport, particularly in the development stage.

The universities and DSB have attempted to remedy this problem with some success via cooperation agreements that provide study concessions for federal cadre athletes, under the DSB achievement sport initiative. ( http://www.adh.de/en_projects.htm ).

The cooperation agreements also seek to create suitable frameworks for athletes within the Olympic training bases. This allows athletes to complete academic training without compromising the demands of high-level sport. Some of the benefits include:

- Free use of the university sports sites

There are also similar cooperation agreements with the German Federal Armed Forces and Federal Border Police. There are 66 universities aligned with the program, and 1200 cadre athletes studying. 36% of the 2004 German Olympic team benefited from the program.

The German Sport University (GSU) based in Cologne, offers research, Ph.D., M.S. and undergraduate programs to more than 7,000 students covering 21 sports-related disciplines, such as applied human movement sciences, sports medicine, educational, social and natural sciences. Among other Centers of excellence, GSU is also known for its biochemistry laboratory, certified and authorized by the International Olympic Committee as the accredited Laboratory for Doping Analysis. The faculties of research and teaching at the university (Institutes) are11:

According to Athletes Careers Across Cultures (Natalia B. Stambulova, Tatiana V. Ryba, Routledge, 7.06.2013)

Career assistance in the German education system of competitive sports

After unification, elite schools of sport were implemented in Germany, based on the experiences of the former GDR. These (currently 39) schools are particularly geared towards helping prospective elite athletes in pursuing a dual career education during grades 6–12/13. The majority of the schools runs boarding houses. More than 11,300 talented athletes are currently students at these schools and thus acting in the network system of school, everyday life and sport. Every school is connected to one of the 20 Olympic Training Centers, offering the opportunity to rely on their service facilities. Moreover, the athletes are taught in classes that are homogeneous according to types of sport. This allows a close harmonization of school and sport tasks so that athletes can optimize their schedule (Bundesministerium des Inneren, 2010). The attendance at an elite school of sport is associated with increased individual and social costs. The question is whether these costs can be compensated for through corresponding gains in sport and/or education.

An evaluation of the boarding schools shows that opportunities for social contact and life outside school were judged as limited by the students (Brettschneider & Klimek, 1998). Furthermore, social support (instrumental as well as emotional) was rated as lower, and the athletes reported less privacy than students living with their families. Boarding school education was evaluated to be less than ideal and in need of improvement (Brettschneider & Klimek, 1998; Richartz & Brettschneider, 1996), primarily due to insufficient role definitions of the educators. The authors called for a better pedagogical and psychological qualification; above all, coaches would need to improve their psychological and pedagogical competence. In the authors' opinion, the conclusion is that a combination of two or more roles (educator and coach) in one person can't be the solution because special tasks need specific competences. Franke (1998) and Meinberg (1984) support the results of Brettschneider and Klimek (1998) when they suggest that boarding schools are a place where young athletes are prone to dependence because of growing up in a kind of ‘ghetto’. In contrast, Elbe, Szymanski and Beckmann (2005) showed an advantage of boarding schools in that students developed better volitional skills than non-boarding school students and non-athletes. This fact results from the boarding school athletes' need to organize new reference systems to peers alongside training and school routines. Hence, boarding schools have pros and cons, as do other school systems.

In 1999, support contracts with universities were initiated by the Allgemeiner Deutscher Hochschulsportverband (ADH), a kind of college sport non-profit organization. Currently, about 90 universities are in charge of 1,200 elite college athletes. Universities' tasks in the ‘partner universities of top sports’ project include the facilitation of admission to study programs; individual consulting and mentoring; helping to organize the curriculum as part-time studies and adapting the schedule of exams and courses to the needs of the athletes; and supporting athletes making the transition from college/university to the job market (Allgemeiner Deutscher Hochschulsportverband, 2011).

Statistical analyses of potential factors influencing the implementation of the ‘partner universities of top sports’ project were done by Tabor and Schütte (2005). They identified three important factors for the program's quality: university size (implementation of cooperation improves with decreasing numbers of students), number of activities per elite athlete (the higher the number of activities in relation to the university size, the better the implementation) and number of elite athletes (the higher the number of athletes the more cooperation is known, workable and established, and the more positive is the evaluation of the program). Furthermore, the results show that successful implementation of the program is highly dependent on the engagement and motivation of the university's mentors and contact persons (e.g. administrative staff and professors/lecturers). In addition, Tabor and Schütte emphasize that the program's quality is also dependent on the engagement of athletes themselves. The more athletes are committed to the program and the more they communicate with the persons in charge, the better are the results of the program. According to the authors, universities are gaining importance for the development of athletes' careers and post-careers. According to Olaf Tabor, Secretary General of the ADH: ‘The aim of the program is to make universities a third column of the German elite sport system besides the Federal Police and the German Army’ (Deutscher Olympischer Sportbund, 2008). Athletes' interview answers show that they use the offered support primarily in the first year of studies (e.g. when taking an additional semester's leave). These support services contribute to a better compatibility with athletes' needs for an academic and a sport career.